The Woman in Red is arguably the first masked comic book crime fighting heroine, having her start in March of 1940 in Thrilling Comics published by Standard/Nedor. She also made two appearances in America's Best Comic #'s 1 and 2 - - - why she was not continued in that title is not clear, but it was not a good decision to drop her . . . she was a very sellable commodity. In this story, one of only two appearances in this title, she is investigating (remember, she is a policewoman) mysterious attempts on the life of a wealthy millionaire who plans to leave his entire estate to his chauffeur and butler when he dies -- apparantly he has no blood relatives. Oddly, the chauffeur is very greedy and evil, and when he finds out about the old man's intent, he plots to murder the butler and the old man so he can have all the money for himself, and have it right away. What a poor judge of character the millionaire was!! In the pics below, the Woman in Red has several encounters with the chauffeur one in which he attempts to hit her in the head, but misses. He apologizes saying he misidentified her. Later she falls off the roof, but catches herself, only to be KO'd by the chauffeur. She finally is saved by the butler, who has been wounded but is still ambulatory, and she goes on to capture the evil driver. I have included the pages of the entire 6 page story here because there is good action on every page. Enjoy!!
Source: Golden Age Comic Downloads 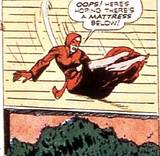