Is Chloroform the Best KO Method? Five Reasons Why I think So...

Why do we sleepy fetish enthusiasts enjoy chloroform scenes so much? What is it about this particular knockout method that is so enticing and so sexy?
It really is hard to quantify. Chloroform scenes make up a large chunk of KO scenes on Sleepycomics.com, over 800 last I checked. I'm going to try and explain why I think chloroform is the best KO method all around!

Chloroform is what I'd classify as a 'soft' knockout. Soft knockouts shouldn't physically harm the damsel. Other examples include gas, fainting and druggings. 'Hard' knockouts involve some sort of physical harm. Head KO's, neck chops, tranquilizer darts...they are quite painful!

Chloroform is sort of in between. It's 'soft' like a gas scene, but 'hard' in the sense that you need to restrain the damsel. This gives you the best of both worlds.

2. The damsel is fully aware of her peril

Chloroform is unique in that damsels who are in the process of getting knocked out, are fully aware of their danger and peril. Think about it. With head KO's, the knockout is almost instantaneous. The damsel doesn't have time to even react to her situation. Gas and drugging scenes are ambiguous, because the damsel may think she is just getting tired.

But with chloroform, the damsel knows she's in danger the minute she smells those fumes on the cloth. And there's nothing she can do about it, except struggle. This situation awareness makes the knockout scene that much more appealing to us sleepy enthusiasts.
Because while we love seeing sleeping damsels, we love it even more when they are in danger. 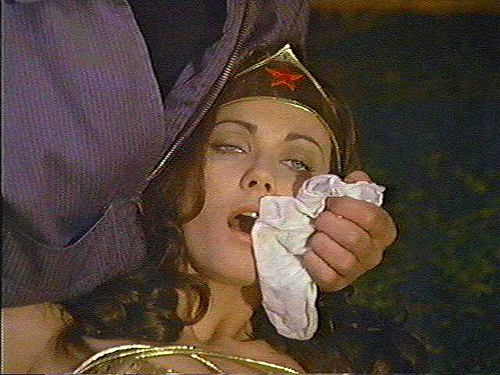 It was the ultimate shift in power balance...and we loved it.

We lowly mortals can only fantasize about knocking out all powerful superheroines. Do you think you could beat Wonder Woman or Supergirl in a fight? No chance. And honestly, even with chloroform, at their current power levels you couldn't touch them.

But there was a time when chloroform and sleeping gas DID work on those heroines. And while you most certainly couldn't head KO Wonder Woman (unless you're in the Golden Age), you could chloroform her! Hey, they did it on the TV show!

Suddenly the balance of power shifted. With this magical chemical, you could defeat the most powerful heroine in the DC universe. And that was awesome.

I am not skipping male chloros on purpose either. Male chloroform scenes are literally harder to find. Chloroform as a KO method, was made for women. God himself couldn't come up with a sexier KO method.

Really think hard. Is there any male chloroform KO scene that even approaches the same level as the Wonder Woman, Catwoman or Ruse chloros that are so lauded? There are none. And that's because it simply looks better and sexier when a woman is chlorformed.

But don't let me have all the fun. Share your reasons for why you think chloroform is the best KO method! If you disagree, tell us your favorite method, and why!

haozhiang38
Jul 04, 2012
First I think chloroform is not too hard to find in our daily life,compared with drugs,and sleep gas.Maybe you can make it yourselves if you have all the materials and some chemistry knowledge.Second Chloroform is a realistic and common way to ko a damsel.And there are some thugs do use this method in many situations,such as,in a pub,or in a black street.In Japan some guys just kidnaped a beauty and chloroformed her for making adult video years ago.These guy had a nickname--chloro gang.Even now these chloro gangs still exist.Almost everyday there will be some girls being chloroformed and violated.The unfortune one may even appear on av.So I think the realistic and common use of chloroform maybe arouse our sleep fetish and stimute our desire.
Reply

haozhiang38
Jul 04, 2012
Because of timid and inferiority,in some japanese men's view, every woman is a wonder woman.They are dare to face women,so they have to use chloroform.
Reply

Red
Jul 04, 2012
Wow haozhiang...that's a fascinating perspective. You mean to tell me they use *real* chloroform on *real* people? That's totally wrong and I hope those people get prosecuted. I think they are taking it too far.

I love your posts because the sleepy fetish in Japan seems so prevalent.
Reply

musdy
Jul 04, 2012
That Lynda Carter scene was amazing for it's time.
Reply

Red
Jul 04, 2012
@musdy: some people think that scene has still not been surpassed. I am one of those people.
Reply

eriepatrick
Jul 04, 2012
Chloroform.But a gas mask has the same aspects of chloroform with one advantage.Once the struggle is weakened,the heoine has far less restricted breathing and when presented right.The sound of deep breathing with the hiss of the gas is fantastic.Also gas is introduced into the heroines lungs where as chloroform has to be drawn in.An a Heroine has no doubt that she is being put to sleep and in distress.
Reply

Red
Jul 04, 2012
@eriepatrick I do also like gas mask scenes. They are really tough to find though.

Do you remember "The Gasman's Sleeping Gas" site? That was one of my first experiences with the sleepy fetish.
Reply

eriepatrick
Jul 04, 2012
Oh yes. The Emassary gassing in the elevator was something to see.I often imagine that being Batgirl put to sleep.
Reply

gytalf2000
Jul 05, 2012
That is a very interesting analysis of chloroform as a knockout method. I certainly enjoyed the "Fausta" scene tremendously; it originally aired when I was fifteen, and it had a major effect on my fantasy life. I was so happy when VCRs became widely available in the mid-1980s; such scenes were the primary reason I purchased a VCR in 1985. I could watch that wonderful KO scene (and other Wonder woman knockouts, of course) over and over!

I really should do more chloroform scenes with Panther Girl and my other heroines!
Reply

@gytalf2000 : You should definitely do more Panther Girl chloros!

And I love taking a "Fausta break". It's when I drop whatever I'm doing and just watch the Wonder Woman chloro scene.
Reply

ijustwatch
Jul 09, 2012
I've read somewhere it causes brain damage, for some reason the fumes cause it.
Reply

Red
Jul 09, 2012
@ijustwatch I've heard that too. We don't worry about the consequences of chloroform in fantasy though

ijustwatch
Jul 13, 2012
@Red K then, taking it to the extreme though, is if the victim is forced to chloroform herself. Not willingly of course; like being mind-controlled or 'blood bent' (if anyone here have seen avatar) That'd take the 'struggling' factor up a notch
Reply
Recent Posts