Get your Scarlet Witch art today!

I'm releasing my art early this week. This time, it's Scarlet Witch! This drawing is based on an existing comic scene, from Vision and The Scarlet Witch, where The Grim Reaper chloroforms Scarlet Witch. One of my favorite comic scenes ever, but I felt it could be done better! 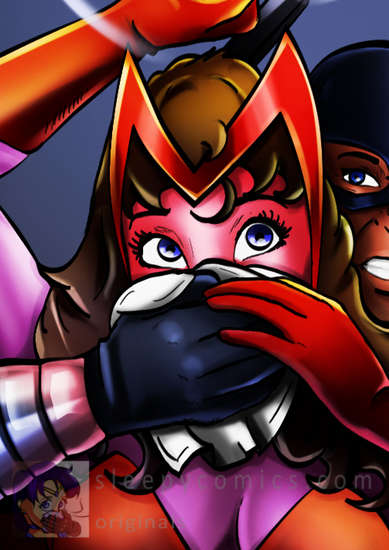 The drawing is once again, just a single panel. I prefer doing those now, because I am able to focus on making one image perfect.

In my drawing, Scarlet Witch's eyes look on helplessly, as the chloroform cloth gets pressed tightly over her mouth. She attempts to use her powers to ward off the attack, but it's futile. Behind her, The Grim Reaper looks on menacingly, his metal scythe pointed at Scarlet Witch. "Sweet dreams - Scarlet Witch!"

When I began planning and sketching out this image, I asked myself how would this look on a comic book cover? I think it would work well as a cover! Just put some titles and a logo...
It's easily my best scene yet. I know I say that with every new drawing, but it's true! Every new drawing is better.

I think sales are slowing down a little and that's kind of sad. Like I said in my previous post, I'll experiment with a more affordable pricing model. If you have not purchased a piece yet, I highly recommend starting with this Scarlet Witch chloro piece. If you like chloroform scenes, you will not find a better drawing anywhere else.

Support a great website, and get great art in return! Thanks everyone!

bobko
Sep 15, 2012
couple of tips regarding the store. I prefer to have the least amount of sleepycomics transactions show up in my paypal. so if u could create a "credits" package for the site that would be awesome, where u basically buy 10 credits which are good for 10 image. this would also work better for discount where as u buy more credits u get more discount.

second, in terms of sales it would help if the store image show up in the search results.

in terms of your drawing skills. art is def getting better. i'm more into poses and closed eyes myself. i love carries. but i guess thats all personal. scarlet witch is an amazing choice.

Red
Sep 15, 2012
@bobko Alright, those are some great ideas. I did want to create a "voucher" system, where you could basically pre purchase a bunch of vouchers, and use them to download images.

The "my purchases" is an interesting idea. I'd have to link your paypal e-mail to your sleepy account.

The main issue right now though, is increasing sales. Because without any sales, those features will be useless.

I like carries too. Most of my art will be either carries or chloros.
Reply

bobko
Sep 15, 2012
don't do vouchers. then people would have to store diff voucher codes. just such a hassle.
Reply

Red
Sep 16, 2012
@bobko I took your advice and created a points system for downloading art. It's a nice improvement and should get a few more people on board. Thanks!
Reply

SGKOfan
Sep 16, 2012
More good art Red. The facial expression is probably the best one yet. It would be cool to see in a future pic some struggling by a heroine.

Keep up the great work!
Reply

Red
Sep 16, 2012
@SGKOfan Thank you for the purchase and great review! I agree, this Scarlet Witch one is so cool! I think every user should buy it.

With every new piece, I try new things. So I will do my best to incorporate struggling in the future.
Reply
Recent Posts